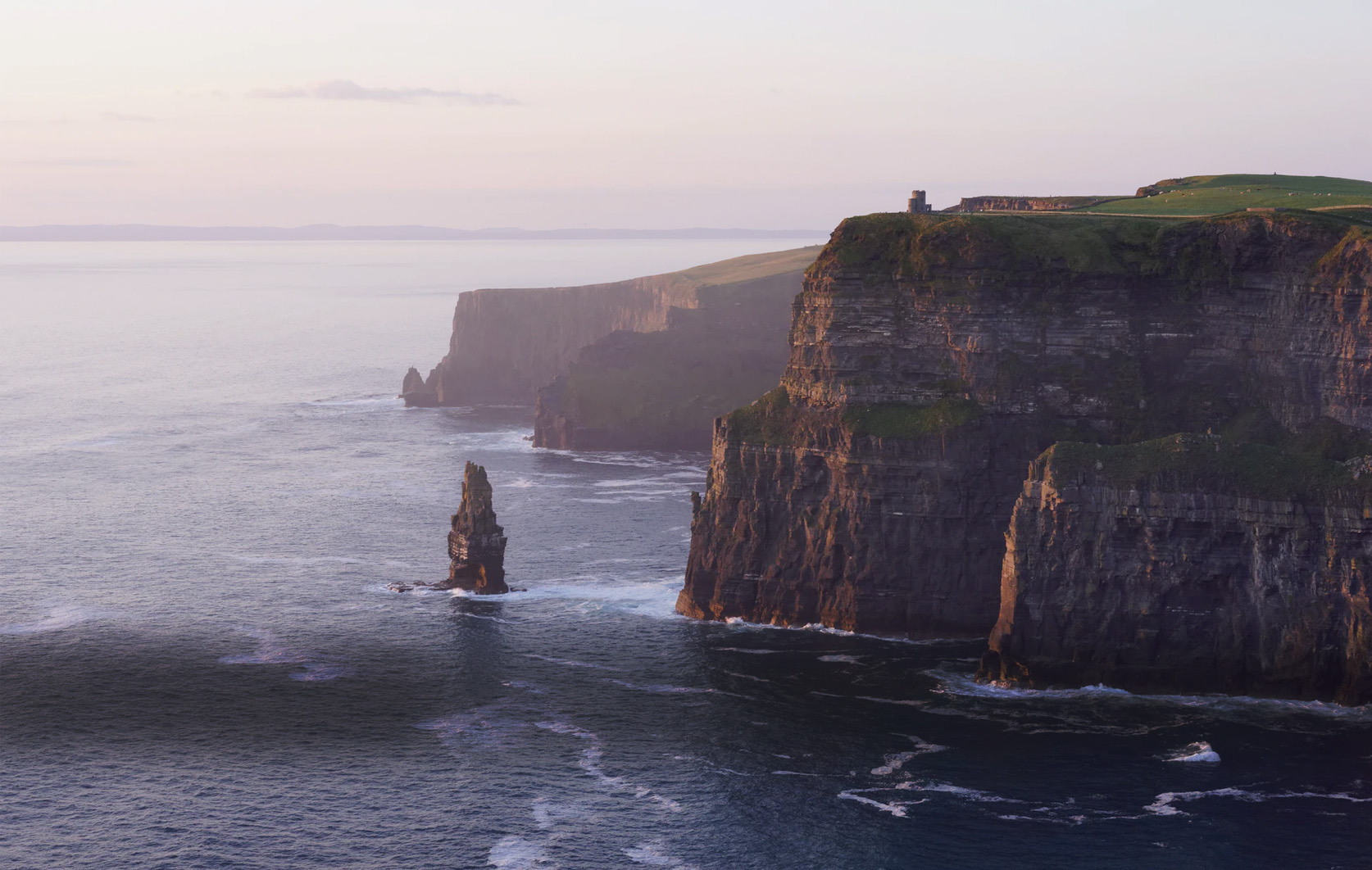 I begin, and probably will finish, with a series of observations and conclusions, based on personal experiences and memories going back some fifty years.

Although born in New Brunswick, the years when I became old enough to absorb, recognize, or even try to hum or sing anything were spent in Quebec City, when my father was stationed there for five years with the Canadian Army.

At that time, there was still a sizable minority of second and third generation Irish in that city, which I know came as a bit of a surprise to my parents, but a welcome surprise.

The church and English school system had a strong Irish-Canadian flavour.  Our elementary school, which we entered at grade one, was named St.Patrick’s, as was the Catholic Church we all attended.

The school was staffed, for the most part, by nuns.  We lined up at the beginning of each day to march into the school with a piano playing a march that I was only to realize some twenty or thirty years later was the classic “Let Erin Remember”.

My mother was soon to be recruited into the “Ancient Order of Hibernians”, which, at least at that time and place, was similar to the Catholic Women’s League.

All of this was incidental, at best, to us, but the exposure to Irish music was to come, not long afterwards, when the family was made aware of a big annual celebration called “St.Patrick’s Day”.   It was marked at that time with a gala concert at the grand old Palais Montcalm theatre.  We were to attend that event two or three times, and even though we were only in the primary grades, we were so affected by some of the songs we heard (obviously very different than anything heard on radio) that the melodies stayed with us for a lifetime.  The most notable among them was “The Kerry Dance”.

When we moved back to Melrose N.B., a primarily Irish community, we gave no more thought to our “Quebec Irish” experience.  Surrounded as we were by a small number of Scottish neighbours who were better-schooled in their native musical culture than most of the Irish, they were not at all reticent about “waving the flag” when necessary.  The Melrose Irish were strangely quiet in such matters – apparently thinking it rude or inappropriate to make a big thing of being of Irish descent.  I recall the late Frank Mahoney, a man I worked for as a boy, telling me one day as we laboured in the potato field, “the “Scotch” are very fine people, but they’re a little too much for flappin’ their wings”.

One who wasn’t shy about it was Pauline (Sweeney) Strang, my uncle’s wife.  A remarkable woman, she raised ten children, taught school, sang and directed the church choir and always kept a folio of Irish songs and music on her piano.  It was at her annual “St. Pat’s” party that we heard for the first time the songs from the “popular” Irish tradition – that is – the great popular songs that were known as ‘tin pan alley’, written mainly by commercial songwriters in the United States – by composers who were just as likely to be Italian or Jewish.  They were written, in many cases, to assuage the homesickness of generations of Irish immigrants who came to North America in the late nineteenth and early twentieth century, and popularized by singers such as Al Jolson, Dennis Day, and Bing Crosby, among others.

So this was “Irish music” in and of New Brunswick, as we knew it.

But those of us who were fortunate enough to have a radio dial, tuned by our parents to the CBC, would occasionally hear bits and pieces of songs that had more interesting melodies, and even the occasional bits of satirical or even social content.  The CBC often played “folk songs” by “folk singers” – Ed McCurdy, Burl Ives, Alan Mills, Pete Seeger etc… Although we didn’t really know what, if anything, that meant, we did find it somewhat more interesting than “Clancy Lowered the Boom”, or Charlie Chamberlain dancing around on television with a plastic derby on his head.

Indeed, were it not for the CBC exposing us to the folkloric aspect of Irish music, we may well have grown up believing, as did so many others, that the Irish were no more than happy, red-nosed, drinking and fighting buffoons.

The one or two examples that I can recall of being made somewhat aware of with a darker, more serious and historical side of Irish history (through music) were “snatches”, fragments of songs that we would occasionally hear from the farmers we worked for.   Two of these were the Hartnett brothers, Frank and John – both related to the aforementioned Pauline Sweeney.   They would occasionally break into songs beginning with phrases like “Oh, Paddy came to London to”…and then trail off into a hummed chorus.   We also heard bits and pieces of “The Wearin’ O’ the Green” – but never enough to know that it was a song of great political and historical significance.   That realization was to come a few years later with the arrival of The Clancy Brothers and Tommy Makem.

Before going any further, there was one other aspect of Irish culture in music that did prevail at that time in our community – a small amount of traditional Irish music played by local fiddlers.

I can recall only three: Bill Noonan of Melrose (Irish descent), Edgar Legere of Port Elgin (an Acadian), and Robbie Spence of Malden (Scots/English).

Their playing was confined, for the most part, to house parties.   Edgar Legere was the most polished of the three, but he did play a few songs that were of Irish origin.   But Bill Noonan and Robbie Spence, though rougher in style, did play, on the few occasions that I heard them, tunes that I later discovered were staples of the Irish dance repertoire.   The only ones I can recall (and the only ones they seemed to know the titles of) were the two famous jigs “Father O’Flynn” and “Haste to the Wedding”.   These two players, and their limited repertoire of traditional Irish tunes, were as important as anyone in whetting my appetite for the music of Ireland.

As they say “all hell broke loose” one night in the early sixties, when the Clancy Brothers and Tommy Makem burst into our consciousness on the Ed Sullivan TV show.   I don’t recall what they sang but it was so memorable that I remember that it was a fifteen-minute set.   Here, at last, were songs, complete songs, that told stories of battles fought and loves won and lost, emigration, success and heartbreak – the small fragments we’d heard as children were a part of some of these very songs.

We learned many of them, and continue to sing them to this day.

In the early eighties, I met a man who had grown up in London, England, but was now living in New Brunswick.  He was John Murphy, who had been listening to, and learning the same Irish repertoire as I had.   It wasn’t long before we had formed a folk group – Hal An Tow – to preserve and promote songs of the British Isles in general.  The repertoire gradually evolved into one of largely Irish content.   We were fortunate to be invited to present some of this material at the first Miramichi Irish Festival in 1984, and at several subsequent festivals all over Canada.

In the late eighties, I became aware of an increased interest in traditional Irish-style fiddling in the Maritimes.   I had become somewhat “sidetracked” by my enthusiasm for the songs, but it was at an Irish festival in Prince Edward Island that I heard for the first time the wonderful Kim Vincent, one of the finest and most tasteful players to be heard anywhere.

In a chance conversation, and a discussion of Maritime fiddlers who played the traditional Irish repertoire, he mentioned to me the name of Eddy Poirier, who, like me, was a resident of Moncton.   To my embarrassment, I had only known of Eddy as a pioneering Bluegrass musician.   I was soon to discover one of the greatest players of Irish fiddle music right in my own back yard, as the saying goes.

At the time, I was doing a weekly radio show that covered a wide swath of the Maritimes, and featuring a healthy content of Irish and Scottish music, both vocal and instrumental.

Unknown to me, Eddy was a regular listener, and he called me one day to ask for information on various pieces of music I had played.   This was the beginning of a treasured friendship.   I was (and will remain) in awe of his expertise and knowledge of the genre.

I have written before (most recently in a past issue of “The Shamrock Leaf”, the periodic publication of the Irish Canadian Cultural Association of NB) of Eddy’s history in Irish music, and of the unlikely way he, an Acadian from Rogersville, NB, became such a master of an Irish music idiom.

For those who will not be familiar with this particular story, Eddy’s father was an untrained, self-taught fiddler who built his own instrument – passing on his knowledge to his son at an early age.   While working on the farm of the Christian Brothers in Rogersville, he discovered that some of the monks, who were Irish-Americans, had brought 78 RPM recordings of the great Irish-American fiddler, Michael Coleman.   He was allowed to borrow them.   It was from these recordings that his son, a young Eddy Poirier, was able to learn so much of a classic repertoire – and totally by ear.

I was astounded, during my first few conversations with Eddy, to hear him talk of Michael Coleman, of whom I had only a cursory knowledge.

Needless to say, I have heard, and learned much about this aspect of music, and have been privileged to accompany Eddy in many venues, while being encouraged to see so many people in New Brunswick learn to appreciate, and hopefully, understand, the subtleties and nuances of this most distinctive style of traditional music.

Of the people I know, I must also mention the well-known fiddlers from the Miramichi – Matilda Murdock and Jim Morrison – who feature many tunes from the Irish tradition, and who were members of the Miramichi Ceilidh, the “large, loose, but fun” group we formed in the mid nineties to learn and play Irish music.   Although this group is now “in limbo” as they say, various members continue to play together in casual sessions.   These musicians include Banjo/mandolin player Bannon Morrissy, bouzouki, mandolin and whistle player Dale Whitty, the aforementioned Matilda Murdock, and her son, guitarist Owen Murdock.

I have touched only on my own personal experiences, and whatever insights I may have as a result of those experiences.  I’m aware there are many other people I haven’t met, not to mention many other musicians whose interest, knowledge and expertise far exceed my own.  I hope they will be able to make some contributions from their perspective and experience, and expand on any study of the status of Irish music in New Brunswick in this space in the future.